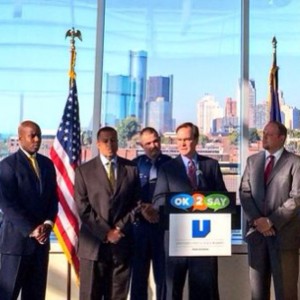 FLINT (WJRT) -(09/11/14) – Keeping kids safe at school has become one of the biggest priorities for administrators. Thursday, the state put some of that responsibility in the student’s hands.

“There’s a new approach, and we need to stop this ‘don’t be a snitch, don’t be a narc, don’t be a rat,'”said Bill Schuette, Michigan Attorney General. To help promote this new approach, Attorney General Bill Schuette introduced the state’s new OK2SAY initiative at International Academy of Flint. The program offers several anonymous ways for students to report bullying, abuse, threats and any other safety concerns. “This is an opportunity to be proactive, this is an opportunity to prevent violence, to prevent intimidation, to prevent bullying, to prevent threats in schools before they happen,” said David Leyton, Genesee County prosecutor. “It will not only change our environment here at school, but we’re hoping once it changes here it will also change in the community,” said Kendra Giles, director of International Academy of Flint. An International Academy student says having an easy way to report issues is important, but just bringing awareness of the issues helps too. “I don’t think a a lot of students realize that you have to place yourself in other people’s shoes when you treat them disrespectfully,” said Erin Hamilton, International Academy of Flint senior. This presentation wasn’t just adults lecturing students – they mixed in several videos and even brought anti-bullying speaker and recording artist Keenan West to debut his new song “It’s Ok To Say.” “Sometimes a good program can get swept under the rug, but if you mix it with maybe music or excitement or an exciting assembly, that helps the kids buy in,” West said. “If you can find a way to connect with everybody with their interest, then I say go for it,” Hamilton said.”If we can save one life with OK2SAY, then we’ve been successful,” Schuette said. Attorney General Schuette says no matter how the message gets across, the impact could be immeasurable.