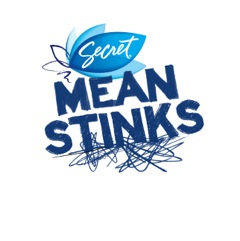 IN ITS FOURTH YEAR, SECRET MEAN STINKS LAUNCHES NATIONAL ANTIBULLYING “NICEST. TOUR. EVER.” ASSEMBLIES TO REACH THOUSANDS OF STUDENTS ACROSS THE COUNTRY

New York, NY October 22, 2014 – In honor of October’s National Bullying Prevention Month, Secret Mean Stinks is excited to announce the fourth year of its anti-bullying program, focusing on inspiring and supporting girls directly in their quest to end mean behavior. Secret Mean Stinks is dedicated to bringing an end to girl-to-girl bullying and, this year, will reach students directly where bully starts – by entering schools across the country and giving girls the tools they need to end it. This year’s Secret Mean Stinks program includes:

5.     Product donation made through the sale of every Mean Stinks product

“With Secret Mean Stinks, we’ve always tried to empower girls to live fearlessly by educating them on how to take a stand against mean behavior, but much of our past work was through teachers, parents and guidance counselors,” said Janet Allgaier, Vice President, Vice President Global Personal Care. “In speaking with many girls, we’ve learned they need the tools to stop mean behavior themselves since so much bullying is happening online and other places where adults can’t be. That’s what this year’s program is all about.”

To kick off the 2014-2015 school year, Secret Mean Stinks launched its Nicest. Tour. Ever. in partnership with recording artist and motivational speaker, Keenan West. The tour, which will reach thousands of students through 75 assemblies, combines pop culture-inspired videos, music and dance with Secret Mean Stinks’ and the Cincinnati Children’s Hospital’s proven anti-bullying curriculum to inspire students to take ownership of bringing an end to bullying at their school. To inquire about having the Secret Mean Stinks Nicest. Tour. Ever. come to a school near you, please email Keenan directly at [email protected]

“My passion is going into schools to talk to kids about bullying and the importance of showing love and respect to everyone,” said West. “Mean Stinks has built an incredible platform that does just that, allowing students to gang up for good by offering advice and messages of kindness, and by providing the tools students need to truly make a difference. Now, with Secret’s support, I can bring this essential message and lessons to so many more schools across the country.”

In honor of October’s Bullying Prevention Month, Secret Mean Stinks will create a #GangUpForGood Instagram challenge where supporters will contribute one Instagram video saying something nice about a friend, encouraging their friends to pay it forward and add on to the Chain of Nice. Each video will be posted in succession on @MeanStinks throughout the month of October and fans are encouraged to join and create their own videos to add to the chain by using #GangUpForGood.

Secret Mean Stinks will hold its second annual Biggest. Assembly. Ever. in January, bringing students across the nation together to resolve to stand up against bullying in one live-streaming assembly. With a goal of 1,000 participating schools, the assembly will feature West as host and performer, special appearances and the debut of West’s custom-created Mean Stinks anti-bullying song, with lyrics taken straight from fan messages submitted via social media. To register or learn more information about the Biggest. Assembly. Ever., check back on MeanStinks.com in November.

Students, parents and administrators can also continue to gang up for good year round with the Cincinnati Children’s Hospital Medical Centers’ “Girls Guide to End Bullying.” This web-based interactive curriculum has been proven to decrease the experiences of being bullied.

Because the best way to fight meanness – and odor – is to prevent it, Secret will also donate $1* from the purchase of every Mean Stinks Clinical Strength and NEW Mean Stinks Scent Expressions deodorant sold in Fearlessly Fresh scents to continue its long-standing support of Girls on the Run, helping fund their girl empowerment programming (up to $100,000).

About Secret Deodorant’s Mean Stinks Movement
In 2012, Secret Deodorant began its commitment to bringing an end to girl-to-girl bullying with the Mean Stinks movement. During the following year, Secret Mean Stinks inspired girls to “Gang Up for Good” by creating 1.3 million acts of “good.” Girls were encouraged to take a proactive role in standing-up to bullying and sharing their #NiceAdvice with each other via social media. Thousands of girls across the country took “blue pinky swears” as a visual reminder and a call-to-action to keep it a “drama free school year.” For more information about Mean Stinks, including the various ways girls and schools can get involved and “Gang Up for Good” to end mean behavior, join the conversation on Twitter with @MeanStinks and visit the Secret Mean Stinks Facebook experience.