2015 – 15 School Shootings
12 of the shooters were bullied and brought the weapon to school with the intent to harm the person who had bullied them.

77% – Have been bullied, physically, verbally, or mentally

86% – Have seen someone bullied

43% – Fear being bullied in the Bathroom at School

2nd – Leading Cause of Death Amongst High School-Age Students

4 to 5 – Who Attempt Suicide Give Clear Warning Signs 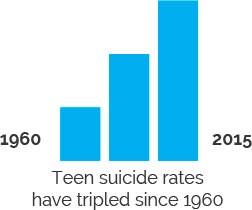